10 Things Every Woman Should Know About Getting Divorced

By Sherry Amatenstein, LCSW (June 9, 2014) Reprinted with permission from Women’sDay.com

We all know and can imagine that divorce is difficult. But rarely do we get it told to us straight just how hard it really is. Should you trust your ex? Will your mother-in-law stop speaking to you? Are there any upsides? From experts as well as women who’ve been through it and survived, here are 10 things every woman should know.

How To Keep Divorce From Ruining Your Credit

Not only can divorce lead to emotional strain, it can also cause all sorts of financial problems. All those shared accounts and co-signed loans that once seemed so romantic are now the cause of major issues. The following important tips can help avoid financial damages due to a divorce.

Creditors aren’t interested in how property and bills are divided during divorce. If you have debt in joint accounts with your spouse, you are both responsible for paying it back.

Creditors are not legally bound to abide by your final decree of divorce. A judge’s order does not override what you owe your creditors and most attorneys don’t alert their clients to the potential for problems if one spouse does not follow the court order. Below are some tips that will help keep divorce from ruining your credit.

Allow One month to make these changes:

If you have additional questions on what you should and shouldn’t do when it comes to your credit be sure to check with an attorney or financial adviso. Laws do change, so make sure you know what your options are should it come to the point where divorce is inevitable.

Divorcing After 50: What You Need To Know

Reprinted with permission from Fidelity.com’s viewpoints 3/13/14

For people over 50, the divorce rate in the United States is on the rise. Just one in 10 people who divorced in 1990 was age 50 or older; twenty years later it was one in four, according to Dr. Susan Brown, professor of sociology at Bowling Green State University and co-author of “The Gray Divorce Revolution.”1 “If late-life divorce were a disease,” says Jay Lebow, a psychologist at the Family Institute at Northwestern University, “it would be an epidemic.”

Reasons for the surge in splits vary. Increasing longevity offers more risk that couples might grow apart; the kids have grown up and moved out, taking with them reasons for staying together; more women are working, with some of them out-earning their spouses; and, there’s less stigma to calling it quits.

Whatever the reason, later-life divorce hits women especially hard. After a divorce, household income drops by about 25% for men—and more than 40% for women, according to U.S. government statistics.2 “Gray divorce can be economically devastating, especially for women who have been out of the labor force,” says Dr. Brown.

At the same time, retirement is more expensive when you’re solo rather than half of a twosome. On a per-person basis, the cost of living for singles is 40% to 50% higher than for couples, according to the American Academy of Actuaries.3 And another consequence of a mid- to later-life split is that there’s less time to recover financially, recoup losses, retire debt, and ride out market ups and downs. Meanwhile, women’s life expectancy is climbing into the 80s, meaning that they may be living longer with less.

So how can women over 50 protect their financial future when they go solo? Here are a few dos and don’ts to consider: 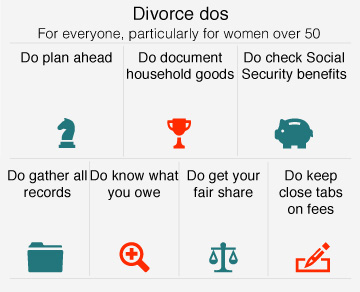 And there’s more good news for divorcees. According to the Women’s Institute for a Secure Retirement (WISER), you can receive your share of your ex-spouse’s Social Security benefits without filing any special papers at the time of the divorce, and—as long as you remain unmarried—you will qualify for those benefits even if your ex marries again.4

1. Don’t necessarily hold onto the house. Your house may have sentimental value, but keeping it doesn’t always make financial sense, especially if it’s a stretch to pay for the upkeep and property taxes. Compared with a well-diversified retirement savings account, a home is more likely to have ongoing and unexpected expenses, and its future value isn’t assured. 2. Don’t ignore tax consequences. Should you take monthly alimony or a lump sum? Should you take the brokerage account or the retirement plan? Should you keep the house or sell it now? Who should pay the mortgage until it sells? You may need to consult an accountant or tax adviser to determine what makes sense for your situation, and if there’s a chance that your past joint tax returns omitted income or overstated deductions, you may want to consider an indemnification clause to protect yourself in case of an audit.

3. Don’t forget about health insurance. If you’ve been covered by your spouse’s policy, you may face a gap in coverage after your divorce and before Medicare kicks in at age 65. If you don’t have coverage of your own at work, you can continue your spouse’s existing coverage through COBRA for up to 36 months, but your cost is likely to be substantially more than it was before the divorce. It may also be more expensive than the health care coverage you can get from your state’s health insurance exchange under the new Affordable Care Act, so it’s best to check. Couples who can’t afford new, separate health insurance policies may want to consider a legal separation instead; that way, you can keep your ex’s health insurance but separate the other assets.

4. Don’t immediately roll over your ex’s retirement account into an IRA. If your divorce settlement allocates assets under a qualified domestic relations order (QDRO), you can make a one-time withdrawal from your ex’s 401(k) or 403(b) without paying the normal 10% tax, even if you’re under age 59½. If you think you’ll need money for unavoidable divorce expenses, you may want to make the withdrawal rather than doing a rollover. Otherwise, if you roll the money into an IRA and then need to tap it for divorce costs, you’ll be subject to the standard 10% early withdrawal penalty.

(Assists with preparation of documents)

Make Your Child’s School Your Ally During Divorce

School is a second home for children. And when the true home is in turmoil because of divorce, that second home can become a refuge, or an outlet for negative feelings.

That’s why it’s important to let your children’s school know if you and your spouse go through a divorce. Forming a cooperative relationship with the school will open doors to resources that will help your child get through the process in the healthiest way possible.

Teachers – Make sure your child’s teachers know about this major change. Children are less able than adults to separate their emotions about an event. (And many of us adults aren’t great at it!) They may be feeling fear, insecurity, guilt, or any other emotion on a daily basis. This may impact their focus at school, self-esteem, friendships, and academic performance. Many children feel safe with their teachers. Teachers in the know can watch for any signs of distress, alert parents to performance changes, and offer a shoulder to the student.

Guidance Counselors – Counselors are trained to help during challenging times. Let them know so they can offer support.

Support Groups – Some schools offer special support groups for children coping with divorce. If your school does not, consider enrolling your child in a group just for children.

Be sure to talk to your child before he or she returns to school after hearing the news of your divorce. Make sure he or she is aware of any changes in routine. Let them know to whom they can speak at school if they have questions or are feeling sad.

Beason said she had been looking forward to the opening of the clinic—housed in what had been the courthouse’s law library, which was moved across the street to the public library—because, as a member of the bench, she had seen a “significant number of people with questions and misconceptions of the legal system.”

Angeles opined that “it’s been quite a journey” since the first self-help center opened at the Van Nuys courthouse in 2000.

Over the years, Dudovitz said the self-help centers have helped over 500,000 people, and assisted over 91,000 in the last year alone.

Noting the “devastating effect of the economy on our community,” Berle suggested a growing number of people with legal problems do not qualify for legal aid, cannot afford an attorney, but still require assistance navigating the court system.

With the Pasadena location, Berle said self-help centers are now available at each of the largest civil courthouses in each geographic area of the county, providing a  “quantum leap in service” for self-represented litigants.

The Pasadena facility was funded by the court, the Judicial Council of California, the Administrative Office of the Courts and through grants from the State Bar to Neighborhood Legal Services and to Bet Tzedek Legal Services.

Janice Shurlow, a family law attorney based at the Pasadena center, said that the new facility is one of the largest centers available, and boasts two rooms for hosting workshops and clinics. The largest self-help center is at the Stanley Mosk Courthouse.

She said that the Pasadena location will be offering workshops and clinics on divorce, paternity, domestic violence, unlawful detainer and elder law.

The resource center is located on the third floor of the courthouse, in room 300. It is open  from 8 a.m. to 4 p.m. Monday through Thursday and 8 a.m. to noon on Fridays.

Sessions are held at:

WIFE.org is the oldest non-profit organization dedicated to providing financial education to women in their quest for financial independence. It is a charitable organization under Internal Revenue Code Sec 501(c)(3).